Jaipur sightseeing, attractions and things to do

Jaipur is a challenging but fascinating city that offers intrepid visitors some of the finest historical monuments of northern India. The city has a wide variety of outstanding tourist attractions, but is a raw and unforgiving destination that will test visitors patience and resolved with a ceaseless barrage of pollution, noise and touts. This guide will provide an introduction to the main sights and best activities while visiting Jaipur.

And of course an extra unwanted shopping trip…

Amer Fort is the standout monument of Jaipur and is one of the finest example of a Mogul defensive palace. The exterior comprises of impregnatable walls that cling to the steep hill, while inside the four court yards reveal ever increasing levels of opulence and extravagance. From the beautiful star mirrored stateroom to the hidden passages of the concubines, there is so much detail and history associated with this wonderful palace, so expect to spend half a day at the Amer fort, which is 8km outside of Jaipur.

The solid defenses of Amer Fort

The Jal Mahal is the beautiful palace that appears to be floating on the still waters of lake Sagar. This iconic palace was constructed by the Muhjah during the 18th century as an overnight lodge, for use during his duck hunting trips. The Jal Mahal is one of the most charismatic buildings of Jaipur but can only be viewed from the banks of the lake, so a visit is usually less than 15 minutes.

The Hawa Mahal is an elaborate and intricate wing of the of the City Palace where the wives of the Muhjah could spy on the city (the Siredeori Bazaar) without fear of being viewed. The ingenious design of the small lattice windows provided a gently flow of cooling air within the state rooms and hence was known as the Palace of Winds. The Hawa Mahal should be considered separate from the City Palace as it is best viewed from the streets outside the palace compound but therefore does not take long to view (15minutes)

The many windows and lattice Hawa Mahal

The extensive Galtaji Temple complex is focused around a series of sacred pools and is set amidst a valley, far away from the chaos of Jaipur. Galtaji is referred to as the monkey temple as there are over 100 macaque monkeys who live within the abandoned sections of the temple complex and when it is quieter come out to play, wrestle and even bath in the holy waters. Galtaji is a great place to escape the intensity of Jaipur and takes around half a day to explore. A visit can be combined with a visit to the Sun Temple.

A monkey scaling the walls of the temple

The Mogal’s had deep beliefs about the ability of the cosmos and planetary alignments to predict the future (mainly with respect to battles, conquests and military campaigns). The Jantar Mantar were the most technological advance set of astronomical observational instruments of the 18th century, able to predict the perfect alignment of sun, stars and planets. Included in this fascinating set of instruments is the world’s largest sun dial (the Samrat Yantra) where the actual movement of the sun can be watched moving at 6cm per minute. All of the external instruments can be seen within 30 minutes but to appreciate the scientific brilliance a visit of at least 1 hour is needed.

The instruments of the Jantar Mantar

Watch the sun set at the Sun temple (Surya Mandir)

The sun temple is a small temple perched high above Jaipur and is a great location to watch the sun set over the city. The sun temple can be reached via a 30minute hike from the Galtaji temple or from Galta Gate plaza (east of Jaipur) 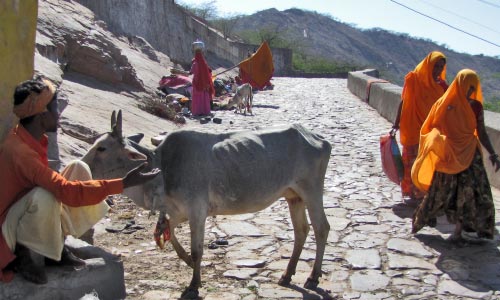 Confusion on the way up to the sun temple

The city palace is a sprawling complex, which is the official residence of the Maharaja and is situated in central Jaipur. The palace reflects the power and importance of the Maharaja with impressive staterooms, intricate carvings and grand gates. The most unique feature are the two huge silver water containers, and are the world’s largest single silver items, which were used to transport Ganges water to unclean London! The large and varied palace which is filled with museums and displays requires at least 2 hours to fully explore.

The main courtyard of the City Palace

The most majestic method to travel up to the Amer fort from the entrance is on the back of an Elephant and this elephant ride will be a highlight of a visit Amer. These elephant rides have to be booked early in the morning as spaces are limited and due to the welfare of the animas.

The elephants ready for rides at the base of Amer Fort

One to Avoid – shopping trips

Everyone associated with shopping trips (be that gem, gifts, rugs, antics) are paid high commissions and expect long or strong sales tactics. Shopping trips are exhausting, offer poor value and can easily ruin an enjoyable day of sightseeing – simply avoid.

There is nothing called a hassle free shop in Jaipur